The two most media-reported features of Covid19 are that it is a deadly killer – and that its ramifications are destroying the stock market investments of millions. Both of these assertions are almost universal now, and both of them are completely without foundation.

Go to the ever-informative site Wall St on Parade, and there you will find acre upon acre of facts, timings, Fed Reserve liquidity inputs and capital-loss stats proving beyond the smallest scintilla of doubt that Wall Street’s overleveraged, greedy banking firms had already landed the entire bourse in a desert of Repo Loan illiquidity.

But it’s yer Covid wot gets the blame, Guv: Covid the Destroyer of Worlds is so clever, so evil, so iniquitous in its quintessentially toxic darkness that it began to make people terrified of it before it even existed.

I just put that one out there for you to think about, people: Covid is a piece of work, and that’s why “Nous sommes en guerre” with it.

The New York Federal Reserve Bank began its 2008 remake last September, ten weeks before the first Coronavirus victim fell coughing, spluttering, sneezing but mainly falling to the pavement of the Wuhan seafood market in Wubei, a province of China which – being a mere 7,480 miles from Wall Street – uses not just different sets of linguistics, but also a writing form employing symbols. As English is to scrabble, so Chinese is to Pictionary. They’re that close.

The running situation among these top New York banks (who are not losing any capital at all because the markets are behaving in an orderly fashion in the manner of a suicidal scorpion) is that they are all losing vast amounts of capital, as demonstrated in the extremely complex chart below:

As these figurese are displayed in words and numbers rows rather than heiroglyphic columns, I accept that most BlackDeath19 believers will struggle with it – but that’s OK, because I can summarise it for you.

Because it’s the biggest bank, JPMorgan has lost the most, which is of course why Big is Good in all things. They have lost (along with three others) two bucks in five, whereas Citigroup has lost one in two. The total drain on capital of these MoUs is thus well over half a trillion dollars. But because of Exponential Bailout Syndrome, this has so far cost US investors and taxpayers slightly more, as in 9 trillion dollars….but the latter up-cougher will gain 0% benefit from that because they’re not important right now, or indeed ever likely to be in the future.

Although so far Covid19 cannot be linked in any way with the missing nine trillion banknotes, it is taking the rap for the stock market carnage that then followed. Below is an extract from my trawl of headline descriptors across 18 mainstream and specialist media online or on paper, plus 7 TV networks:

To think that just one little tribe of nasty yellow Commie bacterial bastards did all that.

Mind you, if you pushed me hard on this culpability thing, I’d say that the fear-spin capabilities of The Mighty Covids are, you know, limited. I’d certainly never employ one (let’s face it, your staff would get ill) because they don’t know how to use a cellphone, they can’t write – and it’s a trial trying to keep tabs on the buggers, they being microscopic and all. I’m just a deplorable bacterialist.

But you see the thing is, I have a contrarian theory about Covid19 and its role in stock market collapse. I think other agents have been in play.

On balance, I’d say the media are at the very least implicated. So too are the  blogsite apocalypse nutjobs, and pretty much every government information source in the West. And call me wacky, but I have a hunch that Macronian and Borisonian overreaction just might have been contributory.

Now as it happens, market traders devour all that kind of stuff. They don’t panic because a bacterium crawls up their nose and eats the brain: they panic when some moron on the New York Times tells them they’re gonna die.

The general drift of my opening address today is, perhaps, best summed up by a senior British medic who lives in China, and has come back to the UK in order to be quarantined. This is what he wrote to me last Friday:

‘It’s absolute bullshit what’s going on in this country right now. It’s surreal, so obviously concocted. They’re talking about ‘three months’ on the TV! There’s no way this isn’t a scheme of some kind.’

Lines on the élitism of discernment

How did we get to here, doggy-paddling in a piddle-pool of fear

with no magnetic moral stars by which to steer?

By seat of pants and ear, they play cacophonies that smear

the virgin sadness seen in every silent rolling tear

we let go in memorium of ancient younger years.

How did it come to this – our forgetful, slack remiss –

allowing us to close our eyes and give an ersatz kiss

from second-hand frontiers I clamoured to dismiss

when already far too old to fall for all of this?

What turning did we miss in distraction, jobs and pique

as we clambered up ambitious trails to every social peak?

Atop the north face on arrival, we looked down on Cripple Creek:

we’d left the Mob behind us, we were Masters of the Clique,

but now the depth of thought is gone, and everyone must speak –

they’re with us at the pinnacle, so why should they be meek?

On each new day they have their say, but muster no critique

however mediocre be the latest mediaspeak.

We wound up here through childish fear of a game of hide and seek.

It’s a good job the COVID19 scaremongering is a load of old shoe repairers, because otherwise the lack of preparation might be a cause for serious alarm. This Establishment classic popped up on social media last Wednesday: 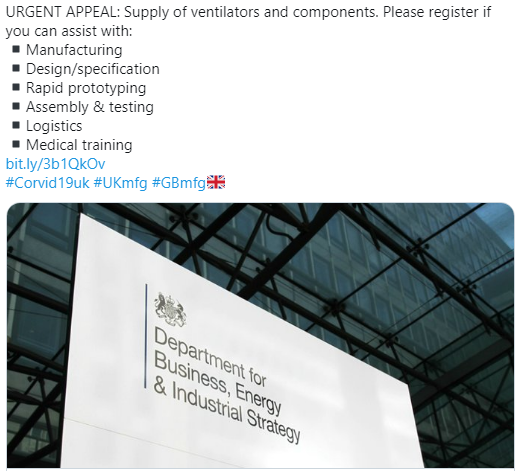 Oh dear. I particularly enjoyed the ‘medical training’ bullet-point at the end.

“Attention all small craft currently moored on the south and south eastern UK ports. Would you mind awfully making your way in an orderly fashion to the French port of Dunkirk, where a large British Expeditionary Force is currently surrounded by sixteen German Panzer divisions”.

In these dark days, we must roll up our sleeves, pull up our socks and remember that, when all’s said and done at the end of the game and in the fullness of time, we’re British.

Some values are unchanging. This particular page was trending for most of yesterday at Twitter:

And this is the Times lead from last night:

Dumb down education, get morons. Scare the shit out of people, get hoarders. Funny how the Establishment’s appalling track record over the last half century always turns out to be our fault. Open immigration floodgates, get racial unease and attract Jihadism, brand all white people as racists. It’s a clever shtick, isn’t it?

And finally on that point, a parting shot on motive.  (My emphasis)

More than a million people most at risk from the coronavirus were told to live in isolation at home for three months last night as Boris Johnson issued his starkest warning yet that the pandemic could “overwhelm” the NHS if people did not heed government warnings.

Yup: we starve the NHS, you get the blame.

“Those the Covids wish to destroy, they first make mad”