Today marks something of a turning point in the ongoing battle to rescue Britain from the multivariate curse of supranational bloc colonialism and ideological blindness.

First up was the latest YouGov voting intention poll – for once, the sort of voter feedback that delivers a clear picture of what’s now coming to pass: 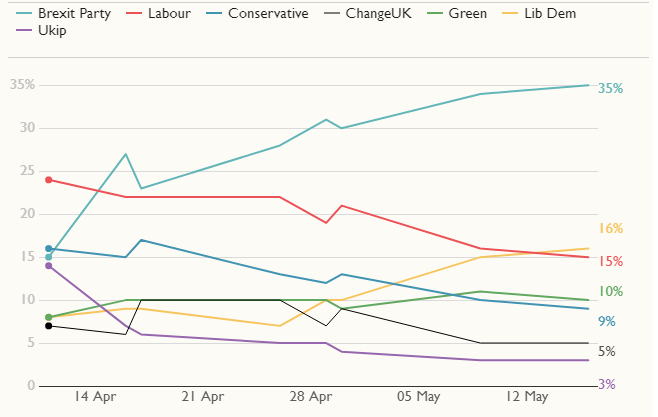 Alright – it might not look clear at first sight, but what the above chart shows is how the UK electorate is gradually retreating into what one might call ‘Opinion Redoubts’.

The Liberal Democrats – being the most unequivocally illiberal and undemocratic Party in favour of ignoring The People – are picking up support from (most probably) quite a few Tory Labour Remainers. The LibDems are now 1 point above Labour.

The Brexit Party (having trounced UKIP) is consolidating its lead (more than twice the votes of any other single Party) but the surge is flattening and suggests a peak at just under 40%….spookily, almost exactly the figure from the Ipsos Mori poll of those in favour of leaving the EU without a deal on WTO rules. Farage must also be taking some older Labour voters under his wing.

As predicted here, The Change Party devoid of ideas about changing anything of importance has changed down from a 10% unimportance to a 5% irrelevance.

But the Big News is that the Conservative Party finds itself in single figures at 9%. It is this development that has driven events so far today. Acutely aware that the Tories are suffering from an infectious form of leprosy, Corbyn has formally ditched further Cross-Party talks. Gambling on the YouGov results being disastrous – and already armed with his own No 1 leadership position in the electorate opinion polls – Boris Johnson has made it clear he is going full-on for Number Ten.

Further, despite being given a less than rough ride by the Tory 1922 Committee, Theresa May now faces more and more Brexiteer backbenchers mouthing off about what a disastrous millstone she is, and how 1922 boss Graham Brady is behaving like the ultimate limp wimp.

Nevertheless, quietly in the background – as ever – sits Jeremy Hunt…the favourite of the Big Money Tories and the Murdoch/Barclay twins press. With exquisite precision and opportunistic timing, Hunt ignored May’s Cabinet guidelines in a speech last weekend, and has written that (with more subtlety and steely negotiation) Britain could have left the EU with fewer strings and a free trade deal. There will be more Hunt Balls before we’re finished, but he remains my pick as the Dark Horse of the Tory hunt for a leader who can be all things to all shades of Blue – and the most acceptable leader of a Coalition after the next General Election. Such a likelihood depresses me enormously.

Meanwhile, it is my task to issue a health warning here. First of all, Nigel Farage must resist the tempting megalomania of faith suggesting that his likely euroelection success can be repeated in a General Election. It cannot: neither Tory absention nor transient traditional Left support can be relied upon when both sets of tribalists fear ‘letting the other side in’.

Second, it is a condemnation of Party-before-Country and leadership ego that Farage and Boris have been unable to launch the Nigel Johnson Party that would almost certainly have swept them to power as a North/South combo along the lines of Kennedy/Johnson in 1963.

For myself, I would regard that partnership as good for the idea of an entrepreneurial Britain making a clean sovereign Brexit from the European Bunion….but disastrous for the idea of such a Britain sharing the rewards of that clean break by giving fair-wage employment to the decent, law-abiding UK workforce. It would do little to heal the ideological hokum split that will – whether we like it or not – continue to divide our country in the foreseeable future.

Finally, I see no sign in any of this of (1) reforming an EU that is heading for economic, cultural and democratic disaster and (2) seeing ourselves as part of a move by thinking citizens to be free of global control by banks, media and bloc geopolitics.

I want Britain to be unhampered by controlling central government and international alliances intent on war, but connected to a Gilets Jaunes, agit-prop free internet interested only in the greatest fulfilment of the greatest number of decent humans and other Earthly species.

I think it makes me an intelligent social anthropologist. But I do feel part of an increasingly small minority of commerce-grounded, fair-minded people.