If the Labour-Tory talks collapse in disarray, then Theresa May is in deep doo-doo. If they succeed, then real Brexit (and Nigel Farage) are in deep doo-doo. The Slog analyses an uncertain immediate future ahead.

I present this graph from my site stats not to boast, but to help set a context for what follows. The graph makes clear the massive uplift in hits at The Slog since the Brexit Betrayal Trilogy was published three days ago: 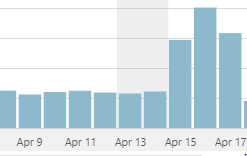 Other qualitative information is equally important. Retweets of the effect of MP interests tied to Brexit Betrayal have been 271, likes of same 189. So there is clearly a groundswell of disgust at the lobbied and otherwise bought nature of the House of Commons. It brought in 60 new followers on Twitter, and 35 first time followers at The Slog.

It’s also clear from the shoal of emails I’ve received that the idea of an Alliance of the Downtrodden in all future UK elections is extremely attractive….as is the concept of guided tactical voting to change the entire nature of our FPTP (First Past the Post) political culture. Such is (obviously) far less attractive to the Old Parties. Less obviously, it also seems to have little appeal for Nigel Farage and his Brexit Party.

Ripple dissolve now to the “talks” between the majority Remainer Conservative Party and the almost entirely Remainer Labour Party. Quietly last Monday, Queen Theresa issued an edict that all members of this “unity” concept must stay at their desks having fruitful discussions throughout the Easter break, the better to devise ways of stuffing We Who Are Not Worthy in the electorate.

It is a received truth on the Labour benches that they have the upper hand in these talks, because it is the Tories who will be hammered in the euroelections, not them. Indeed, the latest opinion polls tend to agree with that analysis. It is thus entirely in Corbyn’s interest to keep on carping about May’s inflexibility on both the customs union and employee rights, while wearing a feigned patriotism on his sleeve.

This is a counterfeit narrative, but one that will convince most Leftist Remainerds with ease. It is also a win-win for Labour, because if the talks fail then ‘they did their best in the face of Nasty Party truculence’; and if they succeed, then the Withdrawal Agreement will pass Parliament….to the eternal delight of Left and Right europhiles. That too would calm the Tories down, because they can evade a drubbing in the euros, and put off a General Election until 2022.

But Nigel Farage disagrees on this point (I mean, he would, wouldn’t he?) and said yesterday that “even if the euro elections are abandoned, the Brexit Party will stand in the General Election, and gain power”.

In truth, Nigel’s maths – and his grasp of the way FTPT works – are somewhat lacking. First up, he has pointedly formed a single-issue Party with no 5 year plan beyond reversing the Brino slide and achieving full sovereign Brexit. Second, he flatly refuses to cooperate with UKIP….or to form a People’s alliance against the metropolitan pc Establishment.

At a delayed General Election following some form of Brino settlement, the Brexit Party will be an easy target for those slagging it off as the croaking voice of needlessly last-redoubt divisiveness. And whatever happens, without tactical voting based on broader commitments made by that Party, Farage has no chance at all of power given the vote-wastage that lies at the heart of FPTP. Far more likely is a full-on tribal vote by Labour supporters to get the Tories out at all costs. That, once reflected in the polls, will encourage tribal habit and hatred among Conservative voters. The result is easy to predict: the Brexit Party will get a massive share of the popular vote, and few if any seats.

My sense is increasingly that Nigel is far from dumb. He must know that such an outcome is highly unlikely unless he forms what one might call an Alliance of the Cheated and Ignored.

I conclude that he has no real interest in smashing the Establishment and genuinely breaking the mould. His overriding hatreds are of the Brussels clique (which I share and embrace) and a desire to once and for all finish off Labour (which wouldn’t faze me…but the lack of real opposition to neocon and neoliberal ideas would).

If the Tory/Labour talks collapse, Farage deserves our support in the euros – on behalf of all Europeans – to join an Assembly that is 40% anti-federalist. If not, then the electorate is faced with far more difficult decisions – and not a lot of options.

There are, nevertheless, the UK Local elections to face. But those also have genuine radicals trussed up….a subject I shall post about in the immediate future.